Announced in January it is now online and available. An unnamed economic development manager told KSBW that it is of its kind that’s being utilized in our entire region. Sold by a company in Las Vegas, this is a cookie cutter program that also was sold to Needles and Mendota (there’s the Fresno Connection again).

Quite the beta – I installed it on an Android phone, so I cannot comment on iOS version. It’s free to download, but is costing the city $300 per month. Hope they are not being asked to pay until it is worth the cost… 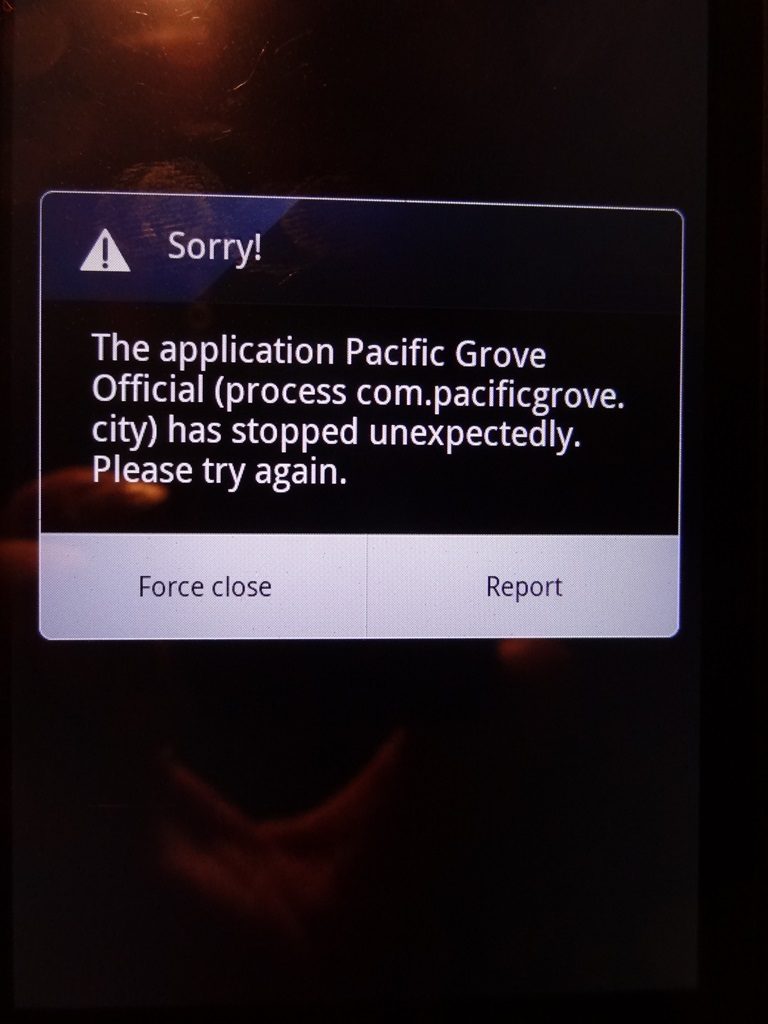 It was quite slow, my impatient tapping on the screen waiting for the ‘News’ feature caused the above crash screen. The home page was graphically messed up until after said crash.

The City Hall screen offers up tiny pictures of the elected politicos. Though all but one have their faces squeezed. Why the long face, Mayor Kampe?

Under “Departments” it offers a list of email addresses with no names. So the app comes with a bonus Puzzle Feature.

Another tab for “Services” grants bonus level of the Puzzle Feature.

Don’t forge the “Calendar”. Oops, the calendar forgets to include a City Council meeting on April 17th as well as every Farmers Market.

Valuable to the citizens is a News feature that crams three feeds on the screen in a ridiculously small font. Read the Facebooks and Tweeters extolling the app and an unnamed RSS feed that will get updated someday.

Since there is no bad news to upset one’s digestion, we can bring up a list of Dining adventures. Don’t know how to change the sorting – tapping here and there just makes it crash. It would be more useful if it was listed A to Z or by distance from my position.

Perhaps cheered by most P.G. gadflies is the “Report An Issue” portion. One can pick from a list of concerns:

Then nail down a location based on one’s latitude/longitude and take pictures or videos of said concern. Where would excessive sea gull poop or uncovered restaurant garbage be entered?

Finally, the weather. I’m trying to figure this out – reported at 11:00 pm it was telling me the Current weather was 70 degrees and 5:27 am. Is the clock as broken as the weather gage? 70 in PG is unusual though even more unlikely at either sunrise or an hour before midnight.

If that’s not hot enough, Saturday it will reach 80!

Not recommended, no one should have took this turkey out of the oven until it’s done. Back to the drawing board MyCommunity Mobile of Las Vegas.